Writers from earlier times and historians have consistently described Llanrwst as a very ancient and important market town.

Many of these have also commented upon the significance, from earliest times of river crossing places and noted the key location of Llanrwst on the River Conwy. The first river crossing at Conwy was not built until 1825, there was no bridge in Tal y Cafn until 1897 nor in Betws y Coed until 1815. The “Pont Fawr” at Llanrwst dates from 1636 and was a replacement for a much older bridge described in 1627 as “ in the greatest decay, so that neither the King’s subjects, nor horses, carts nor carriages could come and go without great danger to life.”

Undoubtedly, before substantial bridges and ferry crossings, Llanrwst was the first place on the River Conwy, above its tidal limits, where it was possible to cross on foot. It seems that this was the place where the drovers, taking their herds to the English markets could easily and safely cross the Conwy. Similarly, early traders taking their goods both East and West would have used this same crossing point and over time, naturally, this place, where people of business crossed each others’ paths, began to grow as a place of trade – and as time passed, an established market town.

Richard James played a leading part in bringing the railway to the Conwy valley being singularly responsible – and largely at his own expense - for the successful passage through Parliament of the Act authorising the railway and also, separately, for legislation creating a Turnpike road from Llanrwst to Abergele. He acted as Secretary to the Turnpike Trust during its lifetime and also as Secretary of the Llanrwst School Board, purchasing a Town Clock for the new school building in Watling Street – which is still in place today – at a cost of about £100. Near his home in Tafarn y Fedw, he purchased a piece of land for use by the Calvinistic Methodists. In 1892 he purchased the Rhiwddolion Estate, Betws y Coed, on which sat a day school and chapel both of which he gave as a present to the local Calvinistic Methodists.

There is some speculation as to when exactly the area which became Llanrwst was first settled. Archaeological records indicate much from various ages within a 5-10 mile radius of Llanrwst, but little or nothing within the area of the town itself. The Roman road, Sarn Helen, ran along the western side of the Conwy valley, linking Betws y Coed and the camp at Bryn Gefeillion with the fort at Canovium ( Cae Rhun), yet, apart from speculation that a structure of stones on the riverbank near Gwydir Park are the remains of a Roman harbour or jetty, there is nothing to indicate that the Romans settled in Llanrwst.

Records tell us that a fifth or sixth century cleric, St Grwst established a church or cell in that part of our town known as Cae Llan but little has been found within records discovered to date from that early period to tell us more about our town.

It is believed that the earliest documented reference to Llanrwst was in the year 954 A.D., when the sons of Hywel Dda – Dyfnwal and Rhodri – invaded Gwynedd and advanced as far as Llanrwst (“Gwrgwst”) where they met the forces of the Princes Ieuaf and Iago in battle and were slain.

This was the commencement of a period of almost five hundred years  which saw Llanrwst experiencing conflict and bitter rivalries between opposing factions, culminating in the bloody struggles of the Fifteenth Century.

At the beginning of that century, under the leadership of Owain Glyndwr, the Welsh fought to re-establish their independence and Llanrwst was the scene of much bitter fighting. The Conwy valley was under the sway of two brothers, Hywel Coetmor and Rhys Gethin, amongst Glyndwr’s most active supporters and Llanrwst was destroyed, one historian writing that “grass grew in the market place and the deer fed in the churchyard.”

In the years following the Glyndwr uprising, the people of Llanrwst set about rebuilding their ruined town but this peace was not to last long, with the Houses of Lancaster and York contesting the reign. Denbighshire was Yorkist, further West, including the Conwy valley, were Lancastrian supporters. One leading Lancastrian, Dafydd ap Siencyn led attacks on the Yorkists – in one account laying waste to the Duke of York’s estates in Denbighshire – and the King, in revenge, sent an army under the Earl of Pembroke, the Lord Herbert, to recover his lands and avenge these actions. Records indicate that the army destroyed and left in cinders the “whole borough of Llanrwst and all the Vale of Conwy besides.” Historians speculate that this vengeful destruction of the town, its church and concurrent actions at Maenan Abbey contributed to the loss of manuscripts and records - and to the paucity of information about this period in our history.

Many legendary tales grew from the exploits of Dafydd ap Siencyn, who, it was said, had his headquarters and hiding place in a cave on the precipitous slopes of Carreg y Gwalch near Llanrwst. His exploits, real or otherwise earned him the title of the Welsh Robin Hood.

The establishment of the Tudor dynasty and the period of history described as the “Restoration” brought a fresh start to Llanrwst, a new church being built and with the generally peaceful development of Llanrwst thereafter closely interwoven with the history and activities of the Wynn family at Gwydir Castle , though the conflict between the Royalists and Parliamentarians saw Gwydir Castle being “rendered beyond habitation” by the retreating royalists who had been defeated at Denbigh.

The Wynn family and their descendants and their intermarriage with the Willoughby De Eresby family (the Ancasters of Lincolnshire) contributed to a number of key developments within the town – the Almshouses and Free Grammar school built around 1610, the Market Hall on the Bryn y Boten (Pudding Hill) market place in 1661 -  rebuilt after a fire in about 1800 by Lord Willoughby – at which time Bryn y Boten was renamed Ancaster Square. Historians suggest that both in relation to improving their carriage journeys from London to Gwydir Castle and to better link their local seats at Gywdir Castle, Cae’r Melwr and Berth Ddu, the family had a hand in the building of the landmark Pont Fawr. Later, in the 1870’s, Baron Willoughby, by an agreement with the Llanrwst Poor Law Union, developed Llyn Crafnant, above the village of Trefriw, into a reservoir to provide the people and town of Llanrwst with a piped water supply and the means of a proper drainage system.

On the Northern outskirts of Llanrwst once stood a mansion house – Plas Isa – of which, sadly, nothing remains but its name. Here lived William Salusbury who had inherited the property from his father. William is noted as the scholar who first translated the New Testament into Welsh – though historians suggest that he completed most of this work in secret during the reign of the catholic Queen Mary, at a small cottage called Cae Du near the village of Llansannan, publishing his great work some years after her death.

One of Llanrwst’s most significant benefactors was Richard James of Dyffryn Aur, Tafarn y Fedw. Born in Pengwern near Aberystwyth and son of John James, miller, who held the Royal warrant and exclusive rights to mill corn etc., in the Aberystwyth area. Richard qualified as a solicitor in March 1853 and in the following year, was appointed as Registrar of the Llanrwst County Court and Secretary to the East Conwy Justices Association.

In 1895, Richard James, bidding against the Reverend Gower of Trefriw, successfully purchased Llyn Crafnant for the sum of £7 15s. 0d and announced to those assembled at the sale, that he was transferring the lake – which provided a water supply to Llanrwst- and land, in perpetuity to the town of Llanrwst.

The photograph shows the ceremony at Llyn Crafnant when a memorial was unveiled on behalf of the people of Llanrwst in gratitude for Richard James’ gift to the town and a framed illuminated scroll presented to Mr. James. 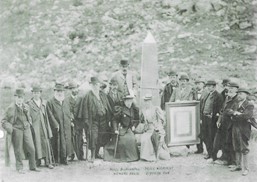 Llanrwst is often described in directories, history books etc., as a market town, mainly involved in agriculture and noted for harp making and in the manufacture of clocks. Whilst those industries were of great significant to the town, Llanrwst has been the centre of a whole range of industries over the centuries.

There was a thriving woollen industry locally up to the early years of the 20th century  ands in the Middle Ages, it was recorded that the price for wool at Llanrwst market set the price for wool throughout England and Wales in that period. Knitted woollen stockings were a noted product and a local writer, Elizabeth Williams describes the Pont Fawr as the Wool market, with stockings for sale hanging on the bridge parapets. Where the Gorsedd Circle sits in Gwydir Park was previously the site of the dye house used by the industry locally.

Along the present day Willow Street, there was a Printing business – as there was in Denbigh Street, a successful Tannery and a Brewery.

Also along Denbigh Street, there was a noted coach builder ( who constructed the frame for the illuminated address presented to Richard James and shown in the picture (above). Until well into the 20th Century, along the road from the coachbuilder an old man ran a business making hand made nails. Opposite the present day bakery, there was a Foundry producing everything from farm implements, to mangles, manhole covers and frames for the local Council and even the door numbers which still exist on some rooms at the 17th century Almshouses.

Alongside the town railway station is a lane now referred to as “The Walk.” Its original name – the Ropewalk will tell you that at one time that part of Denbigh Street was the location of a ropemaking business.

Clock and watch making, harp making and agriculture are well documented. Perhaps less well known is the mineral water / soft drinks factory that existed on Nebo Road in the town.

This elegant structure has stood the test of time and continues to serve the locality despite the growth in size and volume of vehicles using it daily. It is said to be one of the most photographed images in Europe if not the world! In its lifetime, it has acquired a number of names:

The bridge dates back to 1636 and there are claims that it was built by Inigo Jones. However, there is no evidence that he built or designed the bridge. Some refer to it as “Inigo Jones Bridge”

When the foundations for the bridge were being excavated, history tells us that a large freshwater pearl of exceptional quality was discovered and was presented by Sir Richard Wynn, who oversaw the construction, to the Queen, to whose crown the pearl was added. This gave the name “The Bridge of the Pearl”

In 1634, four stonemasons from Lancashire were recruited to construct the new bridge. They apparently put the keystones in upside down, the bridge collapsed on the day of its opening and had to be rebuilt. It is suggested that the stonemasons were rather too fond of mead and whilst undertaking the rebuild, were condemned to drinking nothing stronger than buttermilk – the Buttermilk Bridge is another name occasionally used!

Again in its earlier days, it was claimed that if you were to give the parapet above the central arch a good nudge, the whole structure would shake – hence another name “The Shaking Bridge”

In modern times, we regularly witness the rows and arguments which occur when two vehicles meet at the top of the bridge, with neither driver willing – or perhaps able- to reverse and give way to the other. Such occurrences have brought a newer title – Pont y Rhegi (the swearing bridge!)