You are: Llanrwst > Llanrwst & The National Eisteddfod Of Wales

Llanrwst & The National Eisteddfod Of Wales

History tells us that the Eisteddfod can be traced back to 1176, when the Lord Rhys ap Gruffydd called a nationwide gathering of poets and singers at Cardigan Castle.

The first National Eisteddfod, as we know it, complete with the romantic druidic inventions of Iolo Morgannwg was held at Aberdare in 1861. However, it is interesting to note that a London based society – the “ Gwyneddigions” – of which Iolo Morgannwg was a member, sponsored a series of National Eisteddfodau between 1789 and 1793 including one here in Llanrwst in about 1791. They had been prompted by Thomas Jones who had organised the 1789 eisteddfod at Corwen – the first “national” eisteddfod where it was recorded that members of the public were admitted to view the competitions.

The first National Eisteddfod of the “modern era” to be held here in Llanrwst was the 1951 event. 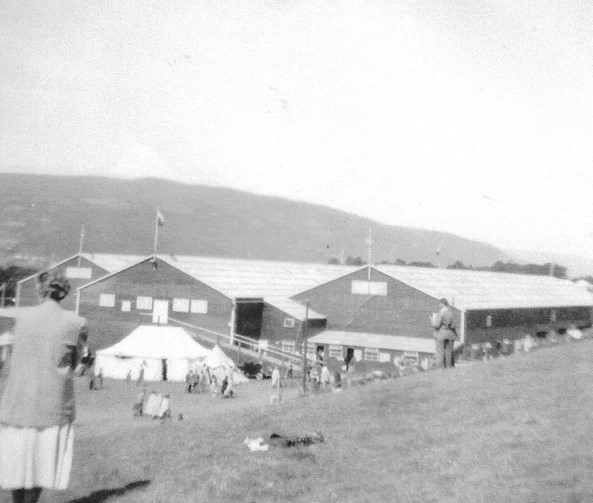 The Gorsedd circle for the 1951 Eisteddfod was erected in Gwydir Park and was constructed using stones brought from each of the Counties of Wales. The first photograph shows workmen raising one of the stones into place. The second shows the Gorsedd circle after completion. 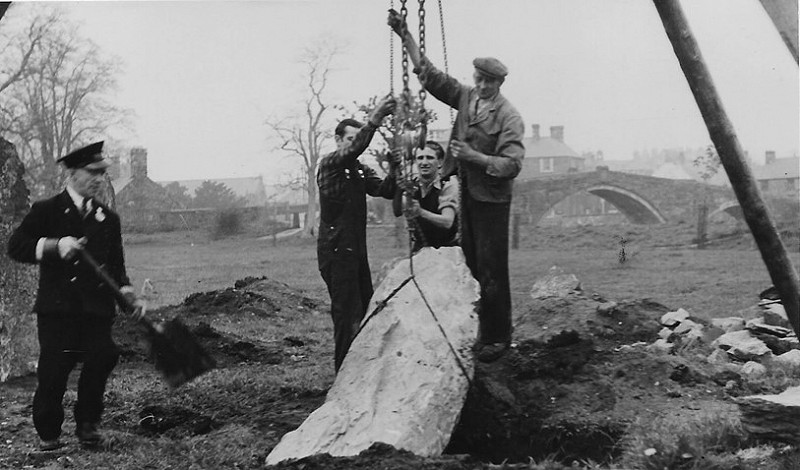 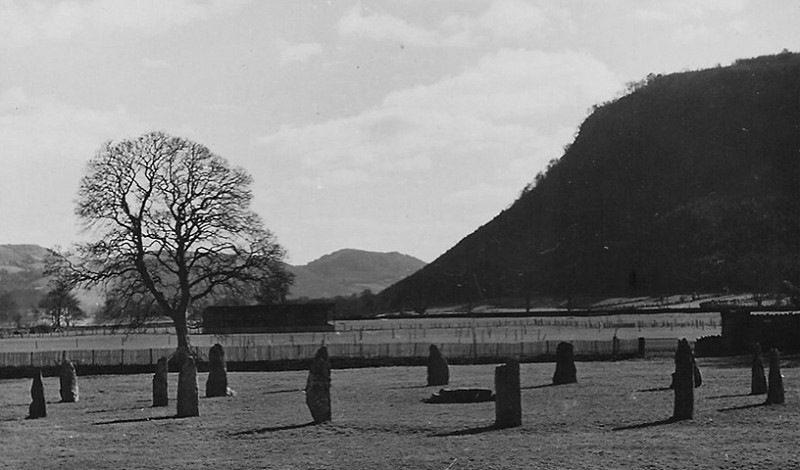 It is probably unique in the long history of the National Eisteddfod that the 1951 event was located in the town of Llanrwst – which was, at the time, in the County of Denbighshire – whilst the Gorsedd Circle was located at Gwydir Park, just across the River Conwy, but in another county - Caernarfonshire!

The attractive line of Horse Chestnut trees along the Gwydir Park river boundary were planted concurrently with the construction of the Gorsedd circle.

The 1951 National Eisteddfod was notable for the fact that one of our own townspeople, T.Glyn Davies, won the Eisteddfod Crown – one of the two main poetry competitions at each Eisteddfod – and the first time the crown was won by someone from the town where the event was being held. 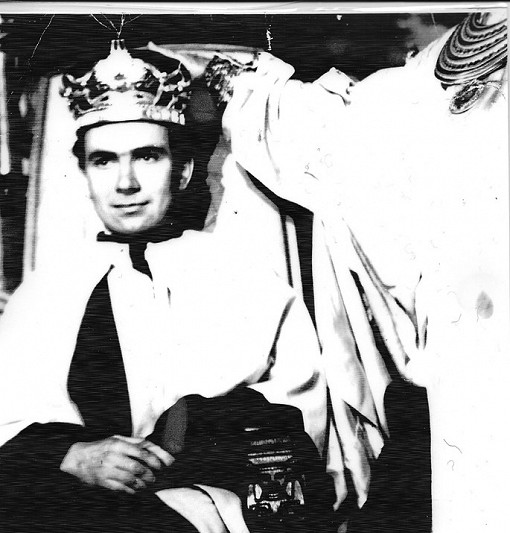 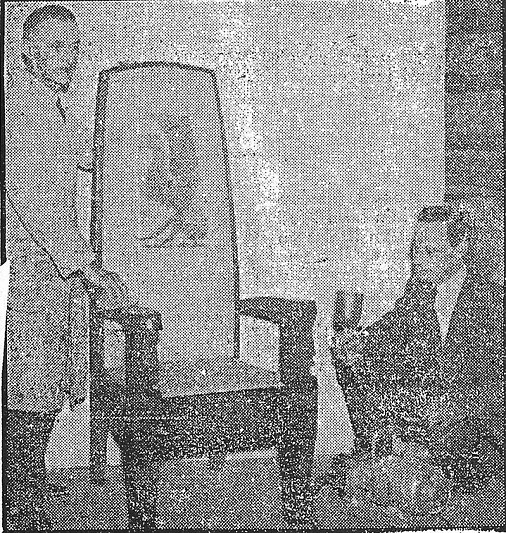 This is the Chair given for the 1951 Eisteddfod and is photographed with the craftsmen with the two craftsmen who created it – Iorwerth Parry and  William Jones of Menai Bridge. The oak was provided by Lord Aberconwy from his estate.

The Chair was won by Brinley Richards of  Nantyfyllon in the Llynfi Valley. He confided that he had not been able to work on his winning entry  until March, by which time he was facing the District Council election. He expressed thanks to   his political opponents on Maesteg Council for not putting up a candidate against him “Otherwise I should never have completed the composition!”

The Western Mail, during Eisteddfod week, reported that T.Glyn Davies was not the only Llanrwst-born winner of a key competition – Mr. E.Langford Lewis, a Llanrwst man by then in professional practice in Wrexham, won the Eisteddfod architecture prize for the best design for a home for the elderly.

The National Eisteddfod returned to Llanrwst in 1989

On this occasion, the Maes was constructed on land to the South of the town, with the main entrance off the lay-by adjacent to the Meadow Vale Garage on Betws Road.

The following pictures show the Maes in course of development in the weeks prior to the 1989 Eisteddfod. 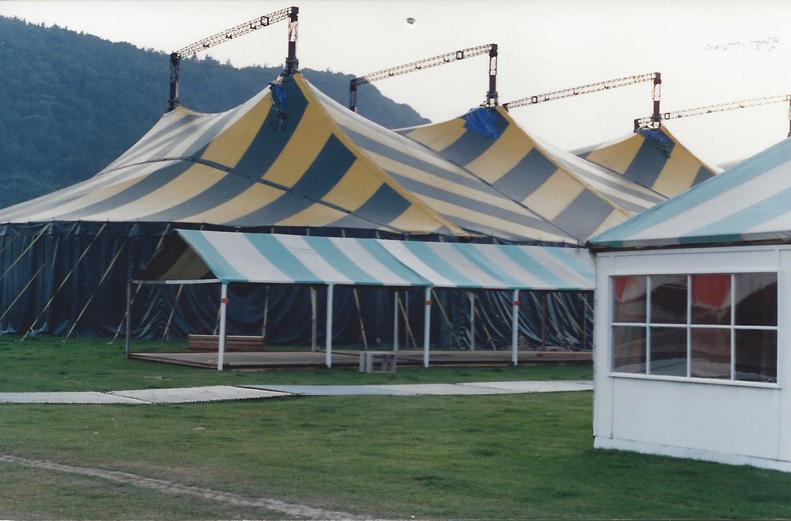 As in 1951, the Gorsedd Circle at Gwydir Park was the focus for formal ceremonies. The following picture was taken at the Proclamation Ceremony in July 1988. The Archdruid is addressing the assembled crowd. 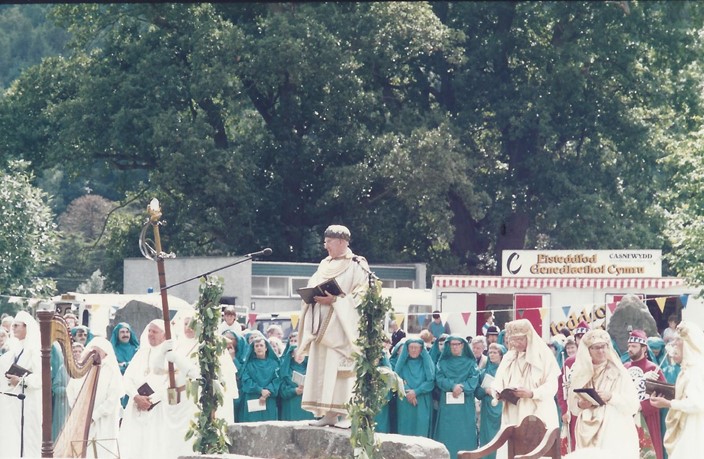 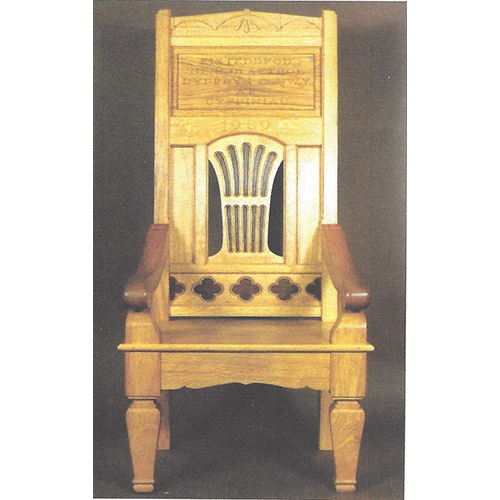 This is the Chair commissioned for the 1989 National Eisteddfod  and was created by the skilled craftsman and noted poet, Huw Selwyn Owen (Huw Sel) of Ysbyty Ifan in the Conwy valley.

The oak used to create the chair came from a beam rescued, it  is recorded, from a 15th century building.

Concurrently, at the request of his sister, Huw Sel created a second, much smaller, chair from the same piece of timber – bearing some similarities to the Eisteddfod chair – which was  presented to Cymdeithas Madog – the body for Welsh learners  in North America, who award it to the winner of the competition held at the end of their Welsh Course each year. 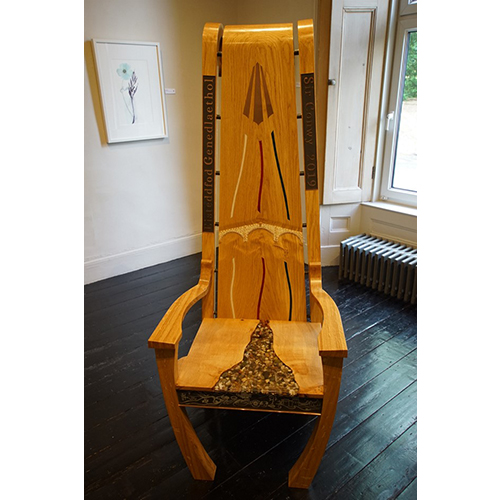 The Chair for the 2019 Eisteddfod designed and  made by Gwenan Jones of Maerdy near Corwen.

The Eisteddfod Crown for 2019 Designed and made by Angela Evans Of Caernarfon. 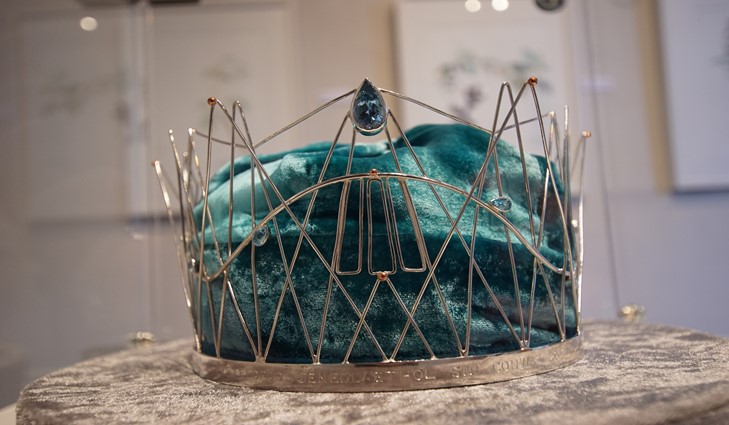